9 Dulcimer Hammer Styles From Around the World 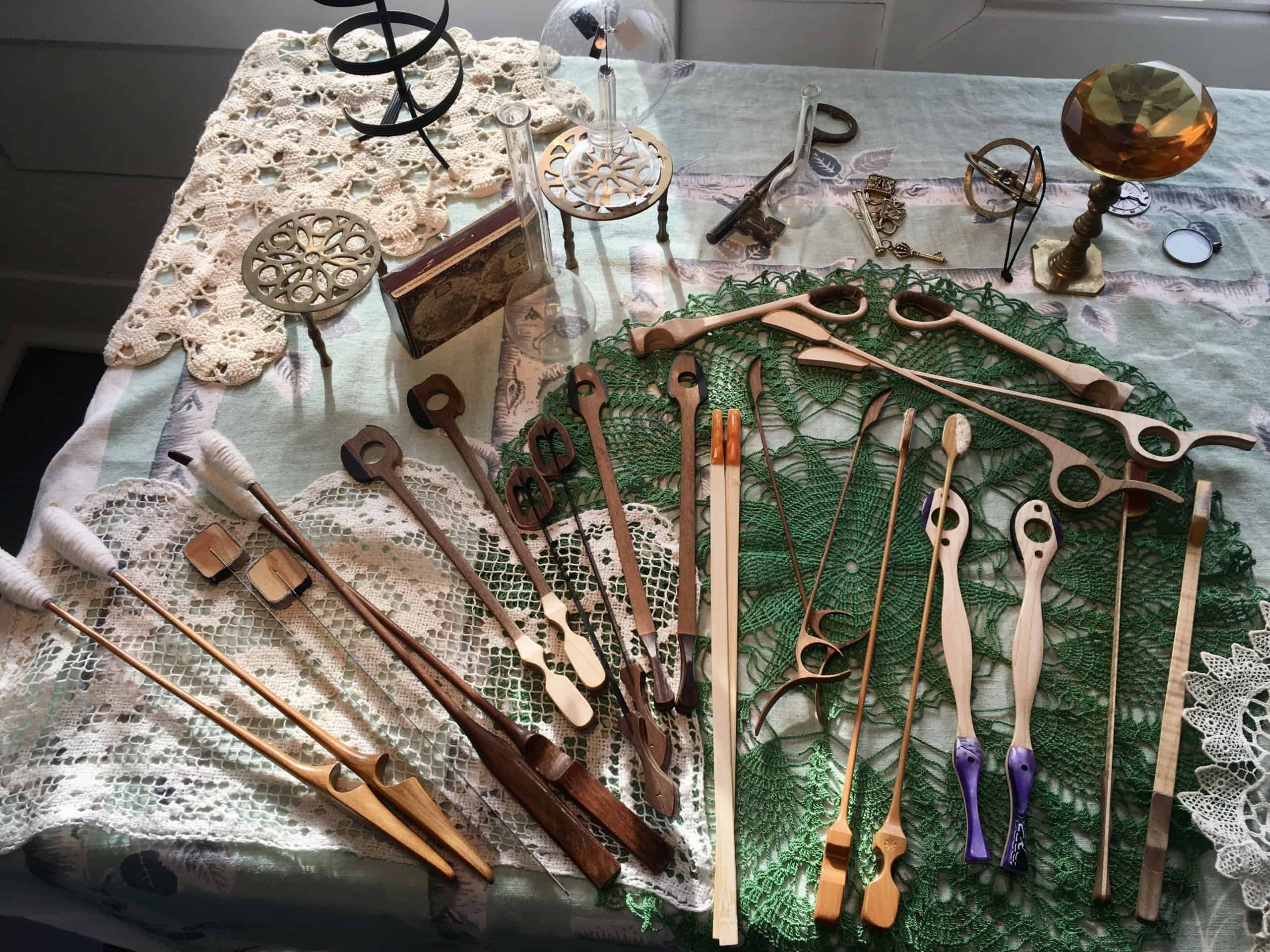 With the hammered dulcimer, not only do you need a well-designed, quality instrument to create beautiful music, you will need a pair of hammers. Hammers are an essential part of producing good dulcimer sound. The hammers you choose should ideally suit your playing style, tone preferences, and dexterity capabilities.

In a previous blog post, “7 Types of Hammered Dulcimers Around the World“, we explored some of the most common hammered dulcimer variations around the world. Now we want to focus on the many varieties of hammers that are used on all of these wonderful instruments. Learning how other people hold and use their hammers is not only interesting, it can give us some fun ideas for our own playing styles and the hammers we choose to use.

The cimbalom and its varieties are played across Hungary, Ukraine, Belarus, Romania, and other Eastern European countries. It is played with cimbalom mallets, which can also be called cymbalo sticks.

Some Romanian cimbaloms called tambal mic are smaller and easier to carry,  but most Romanian players play what is closest to the Hungarian cimbalom. They also use similar hammers.

Nicolae Feraru, a Romanian Gypsy cimbalom virtuoso made these walnut Romanian cimbalom mallets. You’ll notice that the grip consists of the thumbs resting on the index fingers, while the middle fingers support the hammer from below. 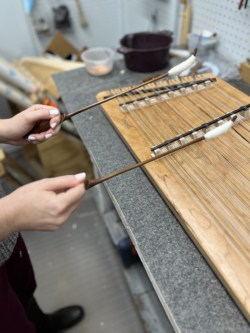 To see this playing style in action, below is Nick playing a tambal mic as an interlude during his cimbalom concert. He specializes in Romanian music, including Gypsy music (muzică lăutarească), regional styles, café concert, and international pieces.

Below we have a pair of similar hammers from Hungary. Contrary to the Romanian grip style, the grip is palms down a quarter of a turn. This gives a completely different wrist workout!

These cimbalom mallets are typically covered with either hard or soft leather, or wound with cotton, depending on the tone quality desired. Using cotton wound around the head of the mallet can help damp a string or muffle the sound. 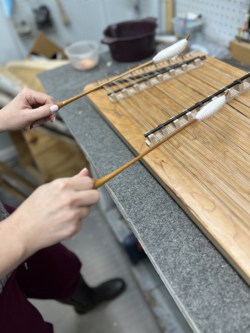 Below is an example of a cimbalom player using the palms down technique. Pete Rushefsky, a talented musician, is working on bringing back klezmer music.

From as far back as the 16th century, klezmer music has been an instrumental musical tradition of the Ashkenazi Jews from Central and Eastern Europe. The theme of the music is typically dance tunes, melodies, and improvisations played for weddings and social events.

The hackbrett is played in Austria, Switzerland, and some northern European countries. It is also played by many Volga Germans who immigrated to parts of the US like Northern Colorado, Western Nebraska, and Southeastern Wyoming. The most common hackbrett is the Appenzell hackbrett, or Appenzeller hackbrett. Typically the hackbrett is played along with an accordion, fiddle, and double bass quartet.

Hackbretts are played with different hammer varieties, including the hammers featured below: 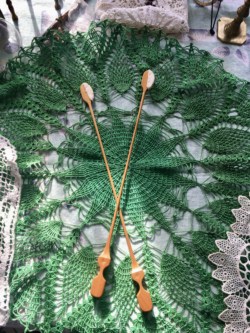 These Swiss hammers inspired our “Euro grip” handle. The head of these hammers are made with skin from the chamois, which is an Alpine goat-antelope. These skins have been harvested for centuries because they are very soft and absorbent. In fact, a lot of us in the modern day like using the material for cleaning our cars. 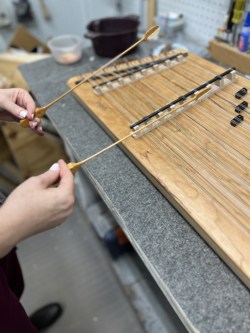 The hackbrett hammers are played with the thumb and index finger resting inside the groove, while the next two fingers are underneath inside the opposite groove. This ensures a strong grip on your hammers, which comes in handy for those of us who have a weaker grip. You’ll experience hammers flying out of your hands less often!

Although we don’t sell hackbrett hammers, we have a similar hammer variation that we do sell. They have the same grip, which we call Euro grip. Check ’em out! These ones featured above have the Michigan-style head.

The santur (or santour, santoor) is played in Iran, Iraq, India, Greece, and Turkey. The instrument is played with extremely light, delicate hammers called mezrab. The mezrab are oval-shaped and held between the index, thumb, and middle fingers. They are typically either a simple piece of wood or are tipped with velvet. The mezrab hammers pictured below are tipped with felt. 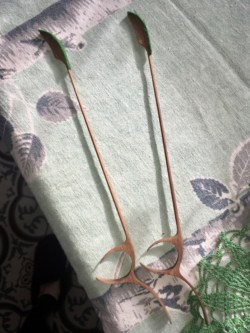 Below is an excellent example of the mezrab in action. Performing on the santur is UK hammered dulcimer player Tomos Brangwyn playing “Chaharmezrab Nava”.

The Iranian Chaharmezrab (which means “4 strokes”) is a genre of traditional rhythmic instrumental music. Its name suggests four (čahār) consecutive strokes of the plectrum (meżrāb) on a string. Dastgah Navā is regarded as one of the seven dastgāhs, which are melody types that a performer uses as the basis of an improvised piece in traditional Persian music.

When it comes to playing with mezrab, it’s all about technique. Since it is an extremely light, delicate hammer, it is essential to play with mostly wrist and arm motion. Occasionally, you will even see some players twist their wrists as they strike the strings.

To learn about the traditional way these hammers are held and used, check out this informative lesson from santur teacher Bahram Osqueezadeh. While these techniques are targeted for santur players, the exercises and arm and wrist motions can be used when holding hammered dulcimer hammers as well. Just be sure to hit the CC for the translation!

The Belarusian tsymbaly or cymbaly is a variation of the concert cimbalom in both timbre and size. Belarusian tsymbaly also tend to be without dampers because hands and fingers are used to dampen the strings instead. The tsymbaly is called the instrumental voice of Belarus. Tsymbalys are played with kruchki (or miniature hammers). 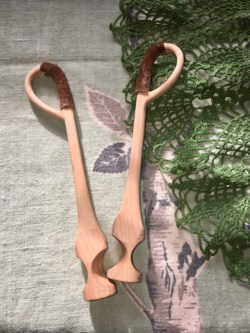 Kruchki are held characteristically between the index and middle finger and have a distinctive curved hook shape. This is a variation of the grip that the Swiss cimbalom players use, but with less fingers involved. The special grip enables the Belarusians a unique style of playing. They can pluck or damp with the free fingers, enabling a wonderful variety of tones to come from the instrument. 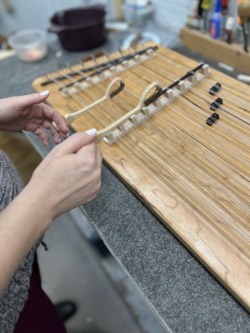 Here is a wonderful example of this technique performed by Valentina Marchinskaya, a Belarusian musician (Watch carefully as she damps the strings). She plays “Gulio Paccini”:

The yangqin is played mostly in China, but has some variations in Japan, Mongolia, and Vietnam. It is sometimes referred to as the “Chinese piano” because it plays an integral role in accompanying string and wood instruments.

The traditional hammers used to play the yangqin are made of flexible and lightweight bamboo and have rubber tips. You can play them two ways; with the rubber side for a soft sound, or with the bamboo handle for a crisper tone (the pointed ends can also be used to pluck the notes). This technique is called “反竹”(fǎnzhǔ), which is perfect for higher range notes and glissandos. Musicians often have several different sets of hammers to choose from, all with slightly varied tones. 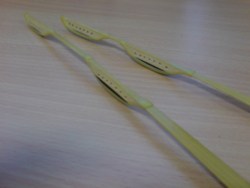 Another hammer variety is the  “雙音琴竹” (shuāng yīn qín zhǔ), which means “double-note yangqin hammers”. These hammers have the ability to play up to four notes at the same time, due to each single hammer having two striking surfaces on it. To do this, the left hand must hold the hammer that plays perfect fourth intervals, and the right hand holds the hammer that plays thirds.

These bamboo hammers were made by Ron Jordan, and have an acrylic head. Here is an example of the traditional grip of these hammers: 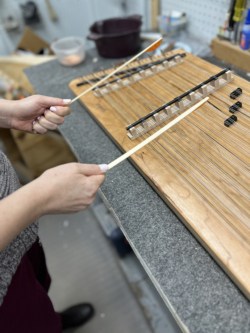 Mi Xuanye is a graduate student of the yangqin and has been playing for almost 20 years! Watch the talented Mi Xuanye’s incredible performance on the yangqin: 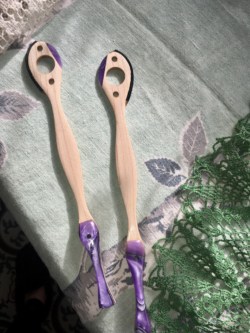 If you’re a hammered dulcimer player, you’ve got a set of hammers that you’ve been using and loving. But we also want to show you other fun styles of hammers in case you ever want to switch it up!

Above are Bob Bedard hammers by Ron Jordan. They’re made with an acrylic handle and one acrylic side for striking. These are the kind of hammers that last.

Also, check out these Double sided Flexi-Hammers made of flexible carbon fiber by Nicholas Blanton! These carbon fiber hammers were developed by Sam Rizzetta and have a couple of advantages. Due to its flexibility, the shank allows you to keep a firm grip on the handle while still getting a nice-sounding rebound from the strings. 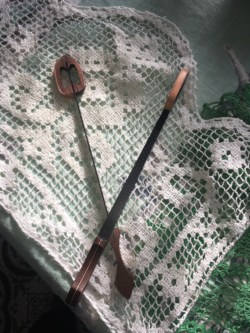 Some of us learn to play with a loose grip which enables the hammers to bounce naturally off the strings. However, this can be hard for some people to get the hang of, especially if they’re trying to play quickly. There are also many players with wrist and arm problems, and the carbon fiber hammers are typically easier for them to use.

Our very own Chris Foss made these interesting hammers below, made from a hacksaw blade. You really can use just about any material to make a fine pair of hammers! 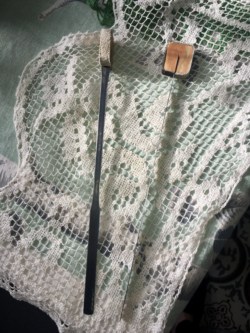 Like the instrument itself, hammered dulcimer hammers come in a ton of varieties. As you continue playing and exploring the hammered dulcimer, soon you too will develop your own preferences when it comes to hammers. We hope you’ve picked up an interesting tidbit or something useful to apply to the creation of your very own beautiful music.

What kind of hammers are you most curious about? What hammers do you like best? Here we’ve only covered the tip of the iceberg; there are so many cool hammers and styles out there! Please comment if you have anything to add to this article. We love hearing from you!

About the author: In her childhood, Nicolette Foss could be found playing underneath piles of sawdust in her father’s hammered dulcimer workshop. She helped with odds and ends in the business, attended folk music festivals, and learned the importance of hard work. These days,  you can find her belly dancing to instrumental Arabic music, learning the Serbian language, making short films with friends, and cuddling her cat Georgie. If you’d like to hire Nicolette for content writing or copywriting work, contact her at: nicolettelady@protonmail.com