For a long time we have believed that most hammered dulcimers are too ‘ringy’. That high ‘zzzzing’ that you hear when you strike a string. Now granted, that’s part of what is attractive in a dulcimer, but too much is really grating on our nerves. We went through lots of designs in an effort to control tone before figuring it out several years ago. 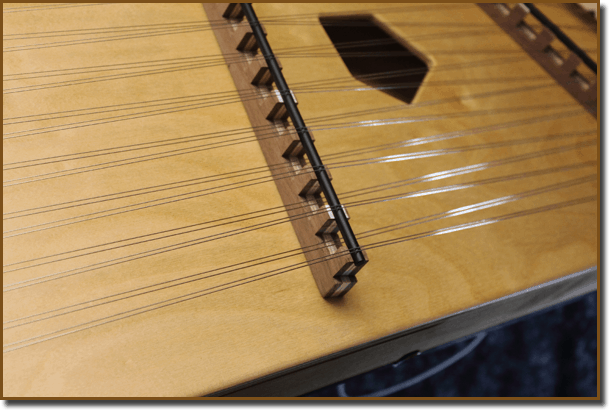 We discovered, and there’s lots of research out there to back this, that a string vibrates two different ways when struck. It vibrates in the familiar wave shape which you can see, but it also vibrates in compression waves all the way from end to end. This compression wave is where the offending zzzing comes from, and once we understand this we can figure out ways to control it and get the sound out of the instrument that we want.

Now the familiar wave form that we see is what produces the tone that we want to hear, the fundamental and all the overtones. These are generated on the side of the bridge that is struck. But the zzzing wave travels all the way from end to end of the string, right over the top of the bridge and the side rods.

You can demonstrate this for yourself by striking any string on the right side of your treble bridge, and listening to the tone. Then strike the same string in the same place while damping that course on the other side of the bridge with your finger. The sound is different, isn’t it? This ‘zzzing’ sound is also relatively unaffected by the tension the string is at. You can actually hear a difference on some dulcimers if you damp the string with your finger between the side rod and the hitch pins where you wouldn’t think any tone at all is generated.

There are two ways to get the sound you want out of a dulcimer. One is to control the string itself, and the other is to let the string do what it wants but control the sound the body projects to the world by design changes. We tried the second approach for years, and learned much, but were never quite happy with the results. But after we discovered where the zzzing was coming from we decided to control it at the source. 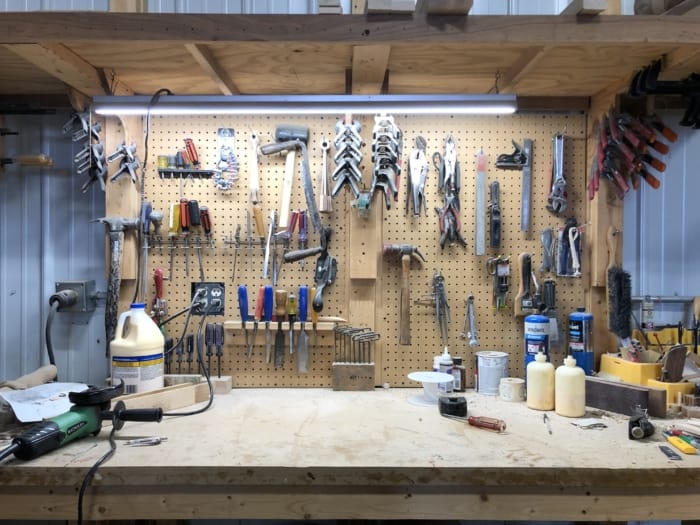 These are our findings:

We introduced our system, and right away caught a bunch of questions and flak from folks because we were doing something different than everyone else. But the dulcimers sounded great, and people just bought them. Lately we’ve noticed other makers who’ve been adapting some of our theories to their instruments. I think it’s great! We’ve only wanted to advance the art anyway.

About Those Sound Holes….

Yes, they are different. That is part of the point, they give our dulcimers a distinctive, elegant look.

For 20 plus years we built hammered dulcimers with round sound holes, and they were very generic looking. We also steadfastly refused to put rosettes over our sound holes because they are a really bad idea acoustically. After all, the reason for a sound hole is to let the sound out. If you cover it in any way, you restrict that, and change the sound of the dulcimer, usually for the worse. Rosettes are a decoration usually unrelated in any way to the overall design of the dulcimer. They draw the eye, and can be distracting. So for the most part they are also a bad idea for the visual aspects of the design. 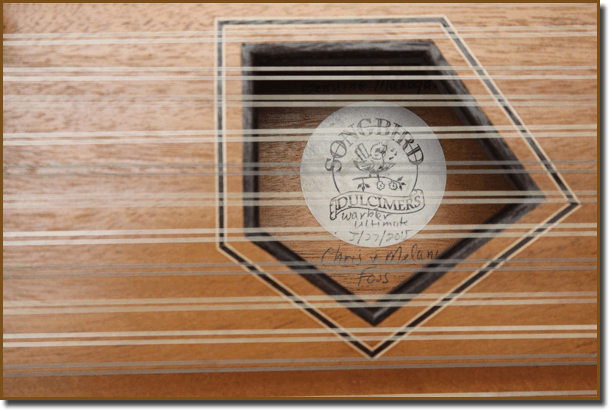 We introduced the Phoebe Chromatic in very early 2014. In order to make it possible to produce at any reasonable cost, I had to come up with a much more efficient way of making bridges. The ones we had used for many years on the Warbler were too time consuming. So I came up with the square notch bridges we use now, and amazingly, they were not only faster and cleaner to produce, they also sounded better. But when we put a set on a standard round hole body, the holes looked really ugly in a strange, disturbing way next to the square notch bridges. We figured out that the old style bridges with all the drilled holes had been visually echoing the round sound holes. But with the new bridges, the sound holes were now orphans on an otherwise very angular design. We needed an angular sound hole, so after trying a bunch of different ideas I applied the five sided sound holes, which look very good. But immediately next to the clean unified look of the new dulcimers, all the older stuff started to look dated to us. Now everything has been switched to the new design.

But if you don’t like the new angular holes, there is an option. We can build any of our dulcimers with all the holes in the back at no extra cost. You’ll just have to let us know, and we’ll be happy to do it for you. All the sound holes in the back of any of the Phoebe or Chickadee models would only add a couple weeks to the time frame. Other models, it will depend on what point we are at in our production cycle. 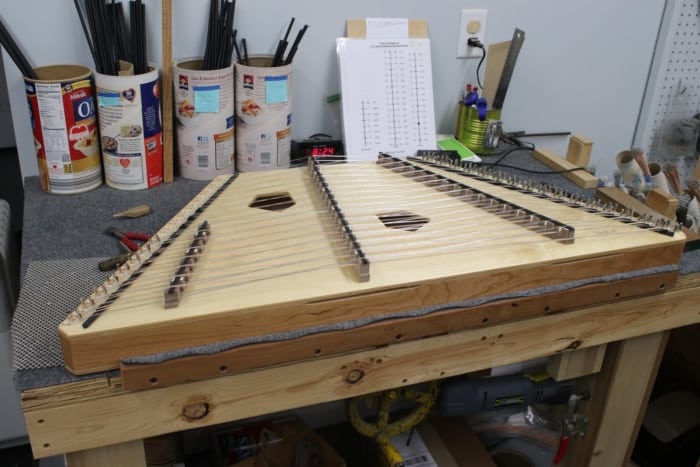 Our five sided sound holes came to me in a very vivid dream in 1998, complete with the way to lay them out to follow the overall design of the dulcimer. I still have the drawing I made the next morning after getting up. I believe it was given to me to give a unified and unique look to our dulcimers. They signify nothing. They aren’t pentagons, they aren’t pentagrams, they are five sided sound holes, and the two on each dulcimer are asymmetrical and mirror images of each other. They are also in line with each other, and all the lines are geometrically laid out. Each line of the sound hole is either parallel with or perpendicular to one of the outer lines of the dulcimer. So they echo the overall design of the dulcimer which of course is very angular. Their shape and location are completely related to the overall design of the instrument, and they complement it.

I learned over many years that most dulcimers don’t have enough sound hole area. Now that my ear is educated, I can listen to a dulcimer, and hear if it is restricted by not enough sound hole area. What is important is not the shape or location of the sound holes, but the total overall area of them in relation to the volume of the box. There is no reason that all the sound holes can’t be in the back, we have built quite a few that way. All of our dulcimers have at least four more sound holes in the back, and the two from the top can be put there to good effect. Any holes a dulcimer top weaken it, so putting them in the back which is under tension, not compression and torsion as is the top is a good idea. I also believe dulcimers project better when all the holes are in the back since the sound coming out of them bounces off the floor toward the listeners. Some of the best, most magnificent Chinese dulcimers have all the holes in the back, and those backs are more hole than back. Therefore the only real reason for a sound hole to be in the top at all is just that it seems traditional to people.

But we don’t need to be “just like everybody else” anyway. Greg Deering of Deering Banjos said many years ago that there are two ways to increase your business. One is to try to steal market share from your competitors. The other is to create your own unique market niche. The second path is the one we have tried our best to follow. Be unique and different, It is just right.

Some Notes on Plywood

If there’s one thing that 20 years and building over 8,000 hammered dulcimer has taught me it is that the anti plywood bias is nothing but mythology. I have built lots of all solid dulcimers. But call me a Philistine, give me plywood any day. If you want a great sounding, durable dulcimer that will stay in tune, and last into the next century, build it of plywood. They can also be made beautiful.

Plywood is a negatively charged word, it is part of our culture. The anti-plywood bias dates back to the craftsman era over 100 years ago, and was a reaction to cheap, shoddy manufactured furniture. Eventually the folk wisdom became that anything made of plywood was inferior. Not true! All material is processed somehow before use, and plywood is just one way of doing that. So it is just a material choice. The maker of any item chooses the right material for each part, and a proper grade of plywood is a very good choice for hammered dulcimer tops and backs 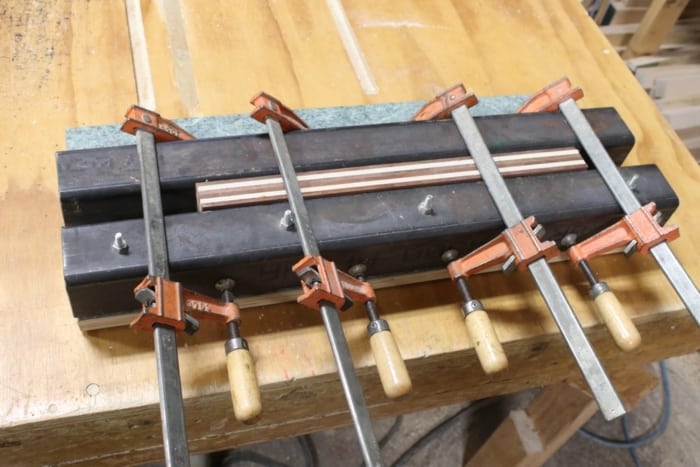 You see, wood is what is called Hygroscopic. Meaning it absorbs moisture from a humid atmosphere, or releases it to a dry one. This makes the wood shrink or swell with changes in the humidity of the atmosphere. And it can swell or shrink a lot! But wood only shrinks or swells across the board, not along its length. The standard wisdom in the wood working world is not to glue a board cross grain of more than 8 inch width. That is the reason for frame and panel doors. That large panel in the center is free floating , and won’t crack. But in the dulcimer world, we commonly glue tops up to 20 inches wide or more right onto the pinblocks. This is very risky, and why some dulcimers crack. If the top itself is very dry when glued on, we can probably get away with it. It will swell with humidity, but won’t crack, though some joints may creep. But this also means that top is straining against the rails, and there is tension in the instrument. Things move, and it goes out of tune.

But plywood is layers of wood with alternating grain directions at right angles to each other. This effectively eliminates wood movement in the plywood. So a dulcimer with plywood top and back isn’t undergoing the stresses that a solid wood dulcimer is. And that is why I like it. As a trained luthier, for most of my life I have heard the folk wisdom that solid wood develops a richer tone than plywood over time. Not necessarily. It depends on how the instrument is played. All instruments develop a richer tone over time, but good regular playing helps it develop farther. The instrument and player adapt to each other, and good playing helps a plywood instrument, too.