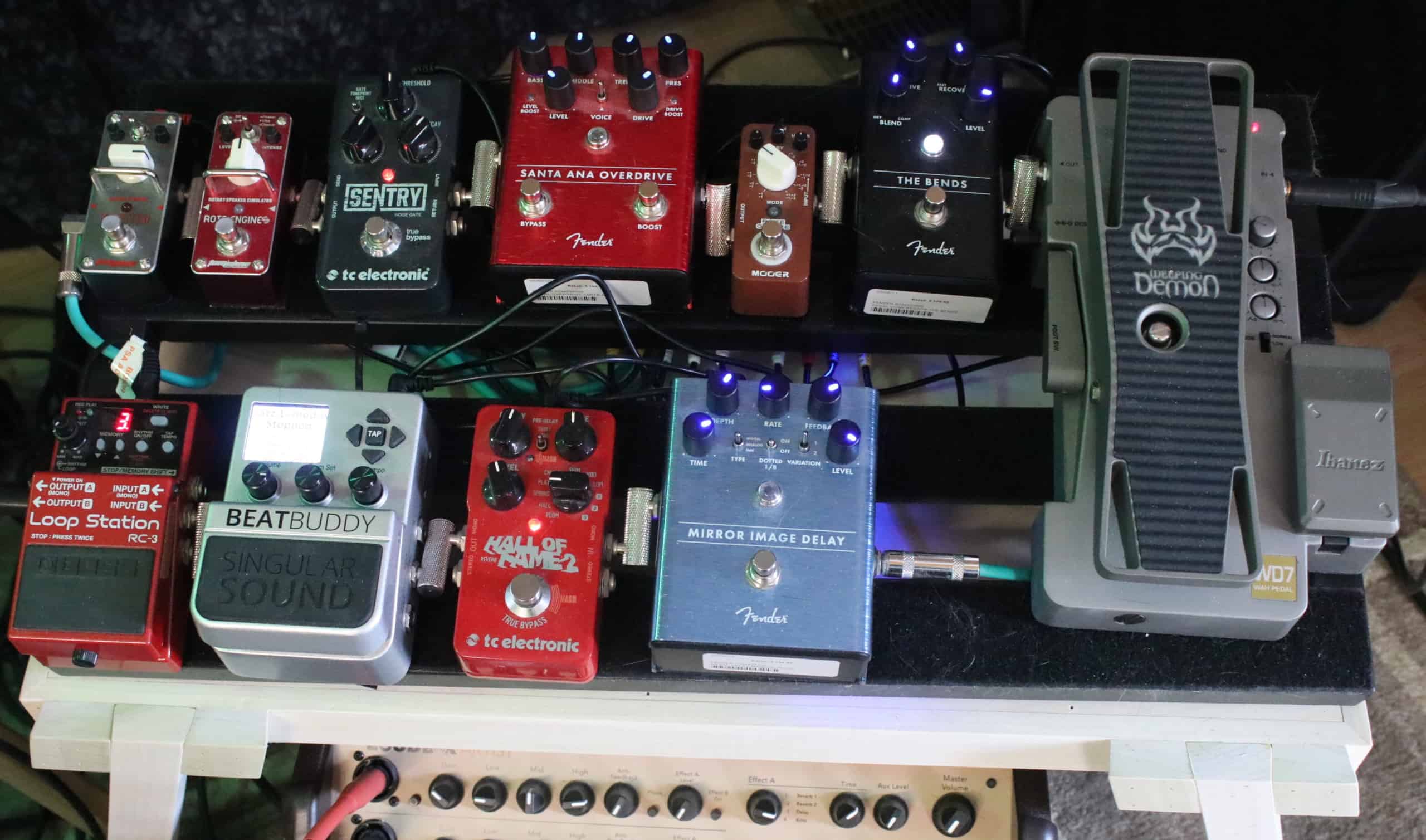 My setup starts with the Fishman Loudbox Artist Acoustic amp which I highly recommend.  It has two channels so you can run two instruments, or an instrument and a mic, or run your instrument in stereo as I am here.  It has several of the most useful effects built in, reverb, delay, flanger, chorus, etc.  so you might not need to buy anything else.  But it also has two effects loops in the back, so you could use a pedal board like mine, or a multi effects processor.  Not the cheapest amp, but worth every penny.  Actually, the way I am recording videos, I wouldn’t need the amp at all.  I run from the preamp on the dulcimer to the amp, then to the mixer in the background which has it own effects loop where the pedal board is plugged in.  Then out to the DSLR camera not in the photo.  I could bypass the amp and run straight from the preamp to the mixer, but I am using the amp to color the sound so since I have it, I use it.  The amp also has an earphone jack which cuts out the speaker when there is a plug in it so you can practice.  When I go out and play somewhere, I don’t take the mixer.  It is just to get good sound into the camera. 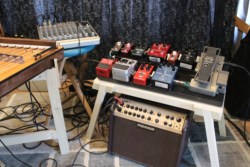 There are several ways to get effects into your sound.  You can buy a modelling amp which has it all built in and you can get an amazing variety of sounds.  Or you can buy a multieffects processor and use it with any amp.  This is the cheapest and probably the most versatile.  I had one caller Mooer GE150, it was under $200, and produced an endless variety of sounds.  But with both the modelling amp or the multieffects processor, you have to find the sounds you like, then set them as presets which you call up when you want them.  So I like the pedal board in the photo above better even though you can get a lot of money wrapped up in one.  It is very versatile, and I have discovered the best sequence for hammered dulcimer.

There are lots of different takes on the correct order of pedals on the internet, but they are mostly for guitar.  For hammered dulcimer, it should be Dynamic;, wah, compression; pitch, volume, etc. then Gain; overdrive, distortion, fuzz, etc. then Noise Gate, then Modulation; chorus, flanger, phaser, etc. then Time; delay, reverb, then anything else like the Beat Buddy rhythm pedal and the looper in the photo.  One pedal will affect the sound of the next is why the order is important.  So this starts with the Wah pedal on the right.  Wah is a tone control that you can move with your foot, or just leave set at a certain sound like I do.  It is really useful.  Next is the compression next to it in the upper row.  Compression limits the wild swings of volume of frequencies creating a smoother sound, and just makes the dulcimer sound a little richer and fuller. Next is an octave pedal which will emphasize frequencies one or two octaves higher or lower than the fundamental.  It is very useful! 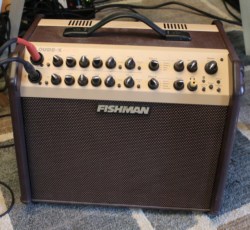 Next is an overdrive pedal.  If I set the gains of the amp or mixer low, then the overdrive can be used to make some amazing rock sounds, and distortion if I want.  Next is the Noise Gate which quiets the electronic hum coming from the wiring and electric lights in the room.  Overdrive and distortion are also noisy so the noise gate is after them in the sequence and takes care of that.  Next is a chorus/ phaser/ vibe pedal and next to that a flanger for that jet plane sound.  From there it goes down to the blue pedal on the bottom row which is delay, and my favorite pedal.  Delay can change your sound in many useful ways from just a subtle emphasis of the note to multiple echos which you can use to play along with in place of rhythm.  Then another great pedal which is TC Hall of Fame Reverb.  I highly recommend this one, it is on most of the time when I am playing.  Then the Bet Buddy which is a great drum machine in a pedal, and then the looper which you can use to prerecord parts that you then play along with.  These are the pedals I have found to be the most useful for hammered dulcimer.

Since this is all basically guitar electronics, it is well developed, and versatile.  You can plug any instrument into it, doesn’t have to be one of ours, any instrument with pickups.  The pedal board can also be used with any amp, even a very basic guitar amp with only one in plug, and no effects loop.  You plug your instrument in to the pedal board (at the wah in this case) and plug the board in to the in plug of the amp.  Works just fine.