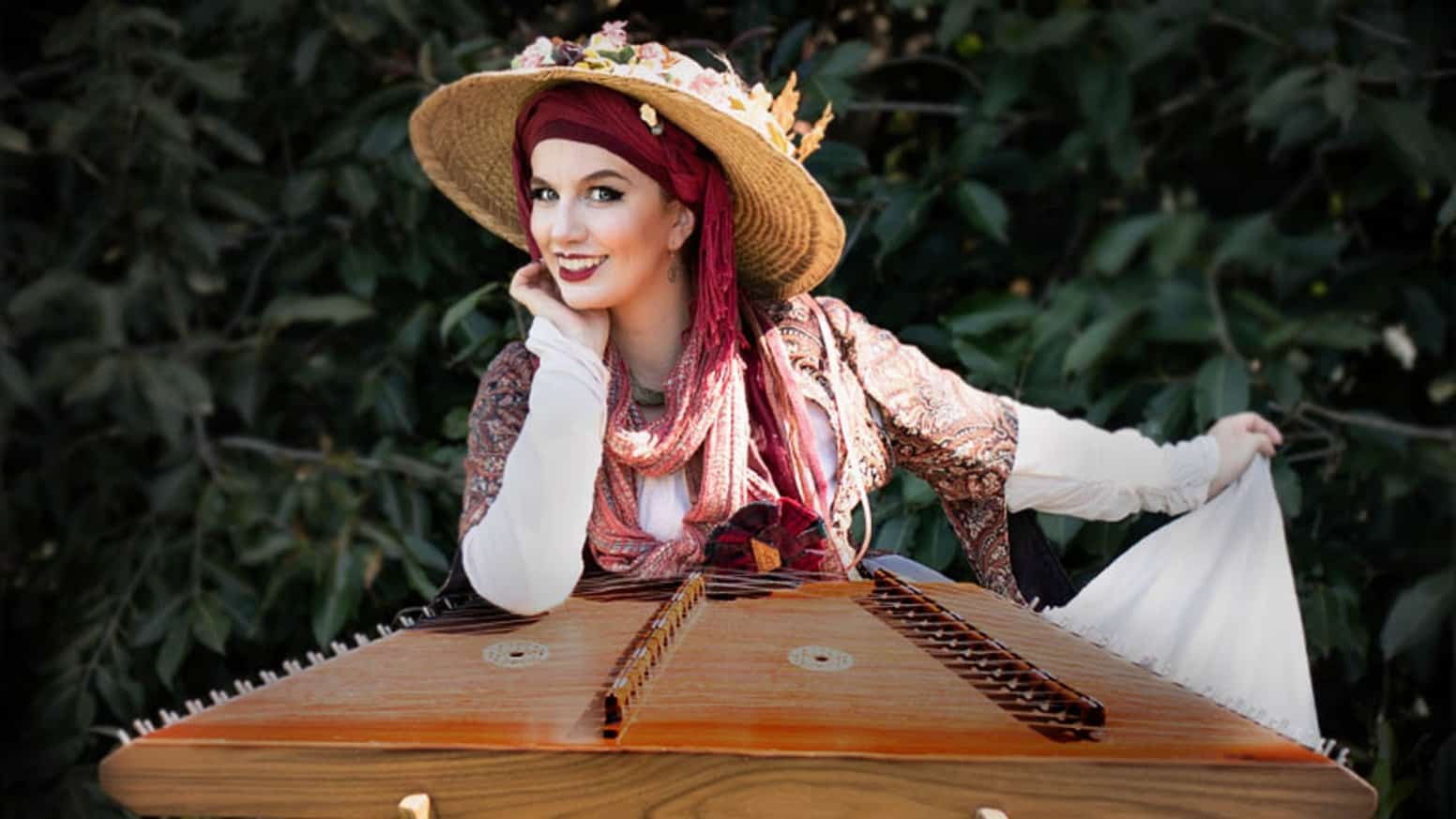 You may have come across this lively member of Renaissance Festival royalty performing on the hammered dulcimer all over the world. Or you may have seen her on various social media platforms where she dresses in exquisite costume and performs as The Lady Victoria.

The Lady Victoria (aka Victoria Van Arnam) is a rising star in the hammered dulcimer community. She has amassed a copious following on TikTok where she spreads Celtic folk tunes to the younger generation (Tik Tok is a new social media platform us old folks are just learning about). And she is blowing up for good reason… She entertains with humor, joy, and a little dusting of magical intrigue from the distant past. Her quick-as-lightning hands hammering out tunes like “Whiskey Before Breakfast” are sure to make you dance while her more slow-paced “Roscommon” or “Soren’s Waltz” can help soothe your modern-day anxieties. And not only is she a delightful entertainer and a talented recording artist, but she is also a successful businesswoman with the recent launch of her very own brand of dulcimers.

We were curious about her musical inspirations, her Ren Faire background, and just where-oh-where does she get that infectious high-energy (and can she bottle it up and give us some)… Read on to find out…

NF: What were your earliest musical influences and how did you get started playing the hammered dulcimer?

TLV: Kate Price’s 1997 album Deep Heart’s Core is the reason I am a musician today.  I had the album on cassette and loved everything about it, especially the hammered dulcimer tracks. I wanted a dulcimer so bad, but we lived in north Florida and there were none to be found. About ten years later, when I was 19, I finally found one in St. Augustine, FL where I was going to college. I started performing on the street, realized I could make money by playing music, and began touring on the Ren Faire circuit.

NF: What kind of hammered dulcimer do you play?

TLV: Masterworks Ultralight is my go-to for fairs because I can pop it on my back and haul it around. Mine has survived a trip to Italy, hail, and numerous rainstorms. I am about to have my very own custom Dulciforte! 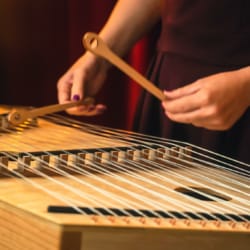 NF: What is your all-time favorite song to play? Why is it your favorite?

TLV: I love the tune Kid on the Mountain, it is a slip jig 9/8, and has five parts. It is so lovely and wild, I have recorded it twice now with different friends and every time I play it brings me joy.

NF: Do you have any tips for beginning hammered dulcimer players?

TLV: Try out some Celtic tunes? Try looking up and playing, you are capable of more than you think.

NF: Do you have a day job or are you a professional musician full time?

TLV: I am a musician full time, but like any sole proprietor that means I spend most of my time working on social media, graphic design, and administrative tasks because it is a business.

NF: You dance, tap your toes, and stomp around while playing the hammered dulcimer, not an easy feat. Where do you get all that energy from?

TLV: I drink a lot of espresso! The crowds at Ren Faires have a lot of stimulus around them and I feel like I have to do anything I can to get their attention, hence all the movement and silliness.

NF: What do you do for fun when you aren’t performing?

TLV: I love video games and have been playing the Witcher, Pokemon Snap, and RimWorld the most lately. I play a ton of base-building games and enjoy farming Sims (silly because I grew up on a farm, but I find them very satisfying.)

NF: Do you play anything besides Celtic music?

TLV: Yes! I love performing video game themes, I play things that folks recognize when I am not playing some totally obscure Celtic tune. Skyrim fits perfectly on the dulcimer. Zelda does as well.

NF: What kind of music do you listen to? Favorite musicians/bands?

TLV: I have been on a big Julie Fowles kick and her 2017 album Alterum is fantastic. I mostly listen to music that is traditional Celtic as I am constantly trying to learn tunes and have a better expression of the tunes I know. Listening to the masters is the best way to get there I think.

NF: What is your favorite YouTube channel you can’t get enough of?

TLV: Definitely Adam Neely! I enjoy his in-depth dives into crazy music theory and his constant attempts to make the theory more approachable. I do not come from a musical background and am missing a lot of the language, so I spend a lot of time trying to pick up theory to be able to better communicate with my peers.

NF: Do you have a favorite podcast?

TLV: I don’t listen to a whole lot of podcasts, but my friend makes a fun story one called The Ordered World, about The Wandering Duelist. Kind of a fun fantasy show. I have my own podcast if you really want more behind the scenes peek into the Ren Faire world, it is called Ren Talks.

NF: Where can folks see you play live next?

TLV: November I will be performing at the Texas Renaissance Festival! (Check out a list of tour dates on her website) 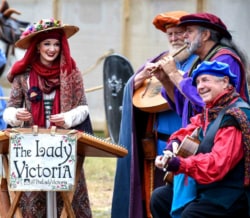 NF: What do you love about Renaissance Faires?

TLV: I love that the patrons come to escape and that the performers and people who work there are a self-selected population. You have to really want to be there to make it on the Ren Faire circuit, it is a tremendously difficult tour to be on, but worth it for the community and art.

NF: M’lady, what are some examples of Renaissance Faire slang that you’ve incorporated into your everyday life?

TLV: Heheh, I have oft been known to say Huzzah!

NF: You wear some beautiful costumes in your Ren Faire performances, as well as social media posts. Where do you find them?

TLV: Most of my garb (as we call it) is custom-built as I am trying to create a very specific look. I always wear the same thing because when folks come to the Faire I think feel like they are opening up their favorite popup storybook, and there we are, just like they remembered from last year, back right where they left us.

NF: Right now, you’re a big star on Tik Tik where you’ve amassed over 70K followers! TikTok videos are known for their wild and wacky content. What is the most fun you’ve had in a Tik Tok video?

TLV: I have a bunch of fun with TikTok, it really gives me hope for the next generation. Celtic Woman is having a HUGE resurgence among the young ladytypes and they are requesting Celtic tunes with the appropriate spelling all the time in my livestreams! I get a lot of comments about my facial expressions, really the most fun I have is reading what thousands of strangers get out of my 20-second videos of tunes.

NF: Tell us a bit about your recent albums, Dulcet Dreams and Tranquil Tones…

TLV: Dulcet Dreams is my favorite album as I got to perform my favorite tunes with my best friends, and Tranquil Tones is my solo album. I prefer playing in a group more than solo for sure. Folks wanted just me though. I have five other albums released under other band names including a Christmas album I am quite proud of with my 2016 project Dancing Hammers.

TLV: It was an absolute blast! I think it is spectacular what Chris Foss is doing with the dulcimer. My next album is an electronic remix album of my solo album so we are kind of on a similar path. I look forward to the next time I get to mess with his setup!

NF: We are starting to see an evolution of the hammered dulcimer from the folk genre into more electronic music of the younger generation. What do you think of this mash-up of old-world style with modern technology?

TLV: Reaching out to the “youth” any way we can is very important for the longevity of the hammered dulcimer and folk music. There are two basic ways to do that, one is by making music that sounds like something they have heard before by electronifying, remixing, or adding modern effects. The other way is to play songs they recognize from modern media like video games or movies on the old instrument.

There are a number of performers beginning to move in this direction and I look forward to seeing what the future holds.

NF: Your new single, “Lo-fi Butterfly” is a synth folk song. Do you produce the electronic beats yourself?

TLV: I did not, I was able to hire a talented EDM producer to remix my version of The Butterfly and the Caterpillar from my Tranquil Tones album and they really took it to the next level. I love all the lo-fi/hiphop to study to videos on YouTube and wanted to try my hand at the genre. Folks say my music is soothing more often than not and lo-fi is totally the chill-out vibe I wanted to capture for this remix.

NF: Where can people get a hold of your new single, and when does it come out?

TLV: The release date is 11/19! It will be available on all major streaming platforms as well as Bandcamp.

NF: We appreciate you taking the time to be interviewed and to give us a glimpse into the glamorous life of The Lady Victoria! Where can people find you on social media?

About the author: In her childhood, Nicolette Foss could be found underneath piles of sawdust in her father’s hammered dulcimer workshop. She helped with odds and ends in the business, attended folk music festivals, and learned the importance of hard work. These days,  you can find her belly dancing to instrumental Arabic music, learning the Serbian language, making short films with friends, and cuddling her cat Georgie. If you’d like to hire Nicolette for content writing or copywriting work, contact her at: nicolettelady@protonmail.com