Where Did the Hammered Dulcimer Originate? 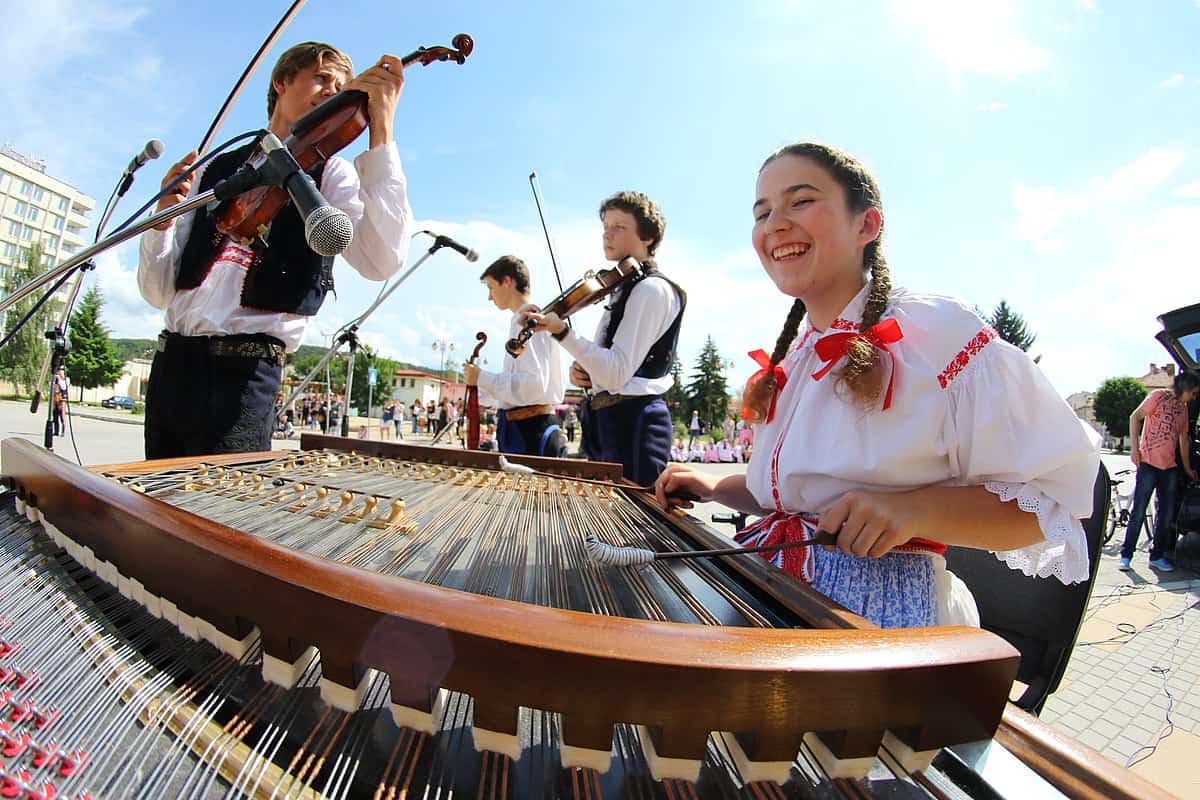 Today the hammered dulcimer is played in some of the farthest crevices of the world. Its music has enriched the lives of people everywhere; from the traditional silk and bamboo genre of China to the folk music festivals of the U.S. But where did this instrument come from and how has it intermingled with history?

In this article, we will take a trip back in time to discover the instrument’s humble beginnings and follow the evolution of hammered dulcimer history. Come geek out with us as we explore the dulcimer’s rich and varied past!

When Was the Hammered Dulcimer Invented?

To be clear, the hammered dulcimer, sometimes called the “hammer” dulcimer, is an old instrument. But how old is it? Old. Some speculate that it can be traced back centuries and centuries to some of the first stirrings of human society. But the Bible times? The jury is still out on that one.

Though the exact origins are still unknown, we do know that the dulcimer was around during the Middle Ages and the Renaissance throughout Europe. And in the 17th century during King James I’s rule in England, it had an explosion of popularity.

This is probably the main reason for the mistaken translation of the King James version; they had dulcimer on the brain. We can so relate!

How is the Hammered Dulcimer Related to the Piano?

Believe it or not, the dulcimer is related to the modern-day piano. If you think about it, the strings of the dulcimer are very similar to the strings inside the piano. And there is a good reason for this similarity. 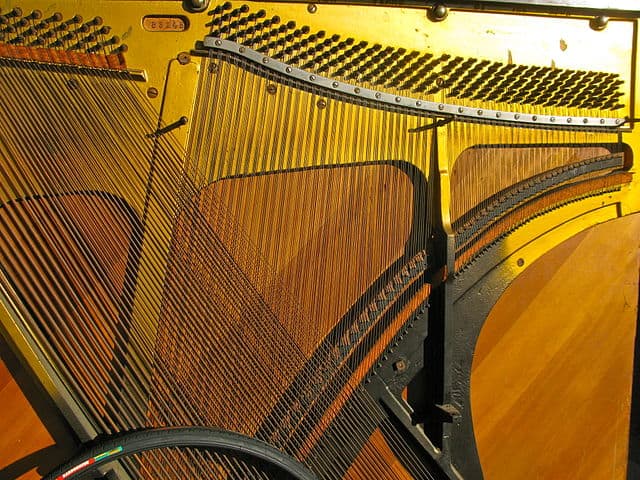 You can see the family resemblance of the hammered dulcimer when you look inside a piano.

You see, in the 1690s a German dulcimer player named Pantaleon Hebenstreit decided he wanted to combine elements of the harpsichord and the hammered dulcimer. The harpsichord, though full of wonderful tone and range, does not have the same ability as the dulcimer to strike the strings at varying degrees of softness or loudness. Its strings are plucked when the keys are depressed, so it is unable to make this volume distinction.

So, Hebenstreit built a dulcimer that was over nine feet long, boasting a whopping 200 strings! Wow!

The next evolution of Hebenstreit’s instrument was created by Italian Bartolomeo Cristofori. He built the first fortepiano (Italian for loud-soft), which was essentially a keyed dulcimer. This instrument was the original pianoforte, or what we now call the piano. The sounds of this model were produced by keys that activated hammers. The harder you struck the keys, the louder the sounds.

These days you will see the term pianoforte shortened simply to “piano.” The piano is still a much-beloved instrument to this day thanks to the existence of its ancestor, the hammered dulcimer.

So back to our evolutionary history of the hammered dulcimer. We left off in Europe, where the dulcimer was much beloved by King James’ England, commonly used in street music there. From Europe, it made its journey across the ocean with the colonists to America in the early 1700s. Samuel Sewall, a judge in Salem, Massachusetts, was the first to mention the instrument in 1717.

It then spread Westward with the settlers across North America and was often coined terms like “whamadiddle” or “hackbrett” (“chopping board” in German).

You could even say it accompanied the building of America. In 19th-century lumber camps of Maine and Michigan, the dulcimer was known as the “lumberjack’s piano.” Often played at home and even in concerts, they were said to be quite common music-makers of 18th and 19th century America. This is probably due to their relative portability compared to the piano, making it an attractive choice to mobile settlers.

Dulcimers were often homemade or produced in small shops and factories. This bred wide variations of the instrument which were manifestations of the varying styles and folk tradition that surrounds it (and still do).

Some of the earliest producers of hammered dulcimers were in New York and Connecticut in the 1850s and 1860s. These producers sent their salesmen as far as the Midwest to play and sell their products. Also, Lyon and Healy, a piano manufacturer in the late 1800s, began producing dulcimers due to the two instrument’s similarities. There were ads for dulcimers in catalogs like Sears and Roebuck and Montgomery Ward circa 1900.

But just as the dulcimer industry experienced this boom, it quickly became a discarded trend. In 1906, Lyon and Healy no longer produced them, and they were not available in catalogs. The reason for this is most likely the influence of music players to tend toward the more popular piano. The dulcimer quickly fell out of the public limelight, except for a momentary spotlight in Henry Ford’s Early American Orchestra from the ‘20s to the ‘40s.

To this day, old-timey dulcimers from this early American era are still found under piles of dust in places like New York, Maine, the Appalachians, and parts of the Midwest.

The Dulcimer in the USA Today

After a relatively quiet period of the history of the hammered dulcimer in the early 20th century, the ‘60s was the beginning of its comeback. Among this shift in popularity were other previously discarded folk instruments, which have resulted in a modern-day folk revival.

Today you can find tons of dulcimer players in the U.S., plus lots of fun festivals to go to, and even professional players (thank you, Internet!). And folk music is not the only kind of music we like on the dulcimer.

Some of the best hammered dulcimer songs are the ones you least expect. This is evident in renditions of Metallica’s “Nothing Else Matters” to Tears for Fears’ “Everybody Wants to Rule the World,” which we have linked below.

The instrument also appears in music soundtracks in the epic “The Lord of the Rings” saga, as well as the dragon-infested, gruesome smash-hit series “Game of Thrones.” Keep your ear open and listen closely, the dulcimer is very much alive and well in today’s music!

Hammered Dulcimer Around the World Today 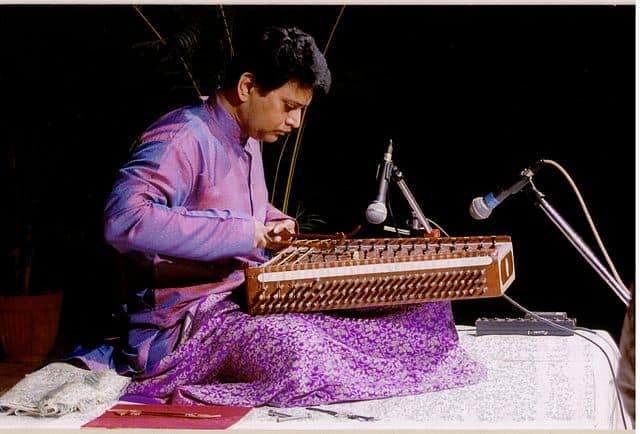 Madan Oak plays the santoor in India. Santoors are played while sitting in an asana called ardha-padmasana with the instrument placed in the lap.

And the U.S. is not the only place that still celebrates this somewhat obscure instrument in the hidden pockets of its society; dulcimer music is still played throughout the world! As the instrument has evolved in varying countries, it has taken on different designs, names, and places in its history, music, and culture.

Here are common names for the hammered dulcimer types used in other countries:

Despite these differences, all these instruments have the same trapezoid shape, have strings running across their body, and are struck with hammers.

From Ancient Mesopotamia to the Modern-Day Songbird Dulcimer

Whether from the Persian Empire or ancient Assyria, it is our belief that the hammered dulcimer originated from ancient Mesopotamia. And although the instrument may have been around in biblical times, it is not believed to be directly mentioned in the Bible. Even so, along its long and arduous journey through varying countries around the world, the hammered dulcimer has maintained its existence, and relative obscurity since then.

What is your opinion on the origination of the hammered dulcimer? Let us know in the comments below!

We here at Songbird Dulcimers want you to experience this beautiful instrument. Discover the joys of playing the dulcimer, just as generations around the world before you! Visit our hammered dulcimer store to be a part of its modern-day revival.

About the author: In her childhood, Nicolette Foss could be found underneath piles of sawdust in her father’s hammered dulcimer workshop. She helped with odds and ends in the business, attended folk music festivals, and learned the importance of hard work. These days,  you can find her belly dancing to instrumental Arabic music, learning the Serbian language, making short films with friends, and cuddling her cat Georgie. If you’d like to hire Nicolette for content writing or copywriting work, contact her at: nicolettelady@protonmail.com