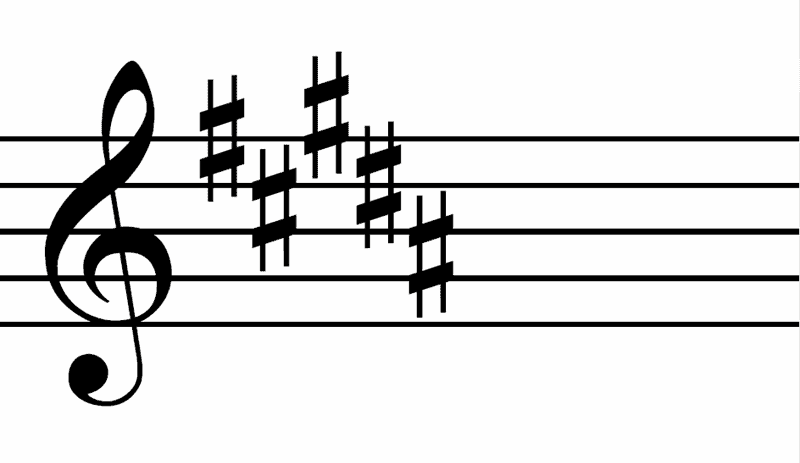 Are you struggling to learn new music? For those of us who don’t know music theory when learning to play the hammered dulcimer, it can be difficult to pick up on songs we want to learn. And if you don’t have a trained ear, it can be even harder to identify what key a song is in. While it isn’t necessary to know or understand what the key of a song is in, it can be extremely helpful when learning music.

In this article, we will break down for you how to find out what key a song is in, and how to find it on your hammered dulcimer. This will help beginners (and all levels) learn songs! Let’s get to it!

What is a Key?

First of all, what is a key? You’ve surely heard this term thrown around in music circles. In music theory, the key is a group of pitches, or scale, that forms the basis of a piece of music. The key could be either a “major” or a “minor” key. Knowing the key of our music will help us to know what area of our dulcimer to play on.

In our video “My First Hammered Dulcimer Lesson #1”, we did a quick introductory lesson talking about scales:

In the lesson, we found out that there were four boxes on our Fledgling hammered dulcimer, each with its own scale: The C scale, the F scale, the G scale, and what we call the “upper” C scale. Being familiar with these boxes helps you learn the setup of your dulcimer, what key you’re in, and where the notes are.

However, there are other scales you can play on the Fledgling that don’t start on the bridge marks, like the D scale, as well as minor scales. Additionally, larger dulcimers like the Finch Chromatic will have more scales available since they have more notes. Learning the scales on your own dulcimer will take some time and hands-on practice.

Every major scale has eight notes and starts and ends on notes of the same letter name, one octave apart. And, each major scale has a minor scale that is its “relative”. This means that they share the same note letters (including any sharps or flats) but start from different places. Let’s look at a simple example that doesn’t involve any sharps or flats: The C major scale and the A minor scale are relative scales. The C major scale contains the notes C, D, E, F, G, A, B, then another C. The A minor scale contains the notes A, B, C, D, E, F, G, then another A. They have the same exact group of note letters, but their root note is different.

The differences between major and minor scales are a lot more nuanced than this, but today we are keeping it simple!

So, if the piece of music is in a major key, this means it uses the notes from a major scale as the basis for its music. And if it is in a minor key, it uses the notes from a minor scale as the basis. If the piece of music signifies that it should be played within the key of G major, for instance, this means that the G major scale is the basis for how to play the song. You will be using the notes and chords within that scale.

Why is it Important to Know the Key of a Song?

How to Determine What Key a Song is In

But how can you tell what key the song is in the first place? Well, there are two easy methods we recommend for beginners. Let’s go over each one.

You can find out what key the song is in by counting the sharps (♯) or flats (♭) on the key signature. Every key signature represents both a major and a minor key. The minor key is called the “relative” minor.

The key signature is located between the treble clef (or bass clef) and the time signature on the top line of the first page of the sheet music. It will look like a group of sharps or flats, or it could be blank. The example below shows one sharp in the key signature, which signifies that the music is in the key of G major. 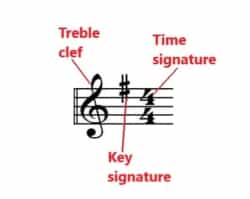 Here is a guide for decoding the sharps and flats to determine the major key:

But the key signature could be referring to the major key’s relative minor key instead. So how do you figure out what the relative minor key is? This is where we will introduce you to the circle of fifths diagram. This can get complicated, so let’s keep it simple for now.

The circle of fifths shows how the 12 tones of the chromatic scale are related to each other. Think of it almost as a family tree. The major keys are represented on the outside of the circle in capital letters, while the minor keys are on the inside of the circle in lowercase letters. For instance, the  E minor is the relative minor of the G major key. They are both represented by one sharp in the key signature. 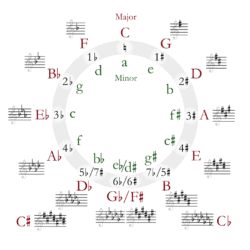 For now, to save some confusion, we won’t go into too much detail about how the circle of fifths chart is set up. Just focus on which major and minor keys are “related” to each other, and what key signature represents them.

So how do you know if the song is in the major or the minor key if it could be either one? You can tell if it is the major or minor key by looking at the sheet music in either of these ways: 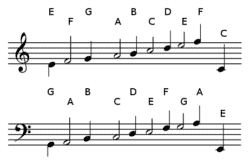 It is extremely helpful to train your ear to listen for notes. This can seem difficult at first, but eventually, you will be glad you did because it will help you pick up on songs much faster. Challenge yourself! You can do it!

Start training your ear by listening to the song a few times. It can help to use headphones to keep out any distracting noises.

Focus on finding the note that seems to “resolve” a string of notes. Resolving refers to the way the song flows smoothly and comfortably back to its tonic or root note. It is the note that will make the musical phrase make sense, or “feel like home”, or sound finished. This note is often repeated and returned to many times during the song. This is called the tonic note, or tonal center and it is what key the song is in.

Try humming the tonic note or playing it on your dulcimer as you play the recording once more. Does it fit into the background of the song? If it seems to fit, that means that note is the key the song is in.

But if the note sounds all wrong and seems to clash with the song, it likely is not the key the song is in. However, there is always the likelihood for human error since not all of us have perfect pitch when we hum!

But is it the major key or its relative minor? Sometimes you can tell simply by listening to it.

Compare the other notes or chords of the song to the tonic note. What mood comes through? In this way, you can make an educated guess: In simplistic terms, you could say that the notes of the minor keys sound sad, darker, and more ominous, while the major keys’ notes tend to sound happier, brighter, and cheerier.

Note: Some songs, especially pop and rock songs may change key. When you are trying to identify the main key of the song, focus on the music in the verses rather than the bridge or the chorus.

Pick Up Songs Quicker By Finding the Key

When you know the key of a song, you’ll be able to follow along in jam sessions much easier (even if you are still a beginner!). Whether you find the key by looking at the key signature, or by training your ear, you’ll find yourself quickly learning songs, and understanding how to make your own beautiful music!

We hope this brief introduction into keys, scales, and the circle of fifths was helpful for you. If you have anything to add, please leave a comment below to help others learn the hammered dulcimer.

About the author: In her childhood, Nicolette Foss could be found playing underneath piles of sawdust in her father’s hammered dulcimer workshop. She helped with odds and ends in the business, attended folk music festivals, and learned the importance of hard work. These days,  you can find her belly dancing to instrumental Arabic music, learning the Serbian language, making short films with friends, and cuddling her cat Georgie. If you’d like to hire Nicolette for content writing or copywriting work, contact her at: nicolettelady@protonmail.com